The Message of Multiple Elections 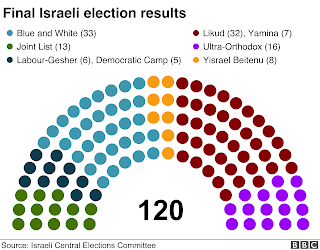 The message of multiple elections is two fold.

First message is to care about the people and not oneself . Members of Knesset don’t speak about the issues at hand we face as a nation. Instead we hear the ridiculous talk of what positions each member wants or will be granted all the while listening to smears and hatred of opposition. Where did our feelings of the need to save the people and return to a glorious Zion, our homeland go? To stand strong in the face of our enemies for our own survival. This is what we mean when we say national adversity and tragedy brings about the best in us. It is not ideal and so therefore why go there? Unfortunately we seem to lose ourselves in the lure of money and power and forget the overall moral good and destiny of our holy nation and humanity for all intents and purposes.

The 2nd reason you’ll find quite interesting.
Initial meetings between  Netanyahu and Trump seems to have concocted a secret agreement to roll out the “deal of the century״ for the Palestinians and Israel. An issue trump has expressed often as the issue no other president was able to achieve and ultimately would put a leader on the map of history whoever could achieve it. Both leaders with their egos felt destined to do it and Trump emphasizing a new approach to get it t done. Quickly yet calculated in the same year, the US moves her embassy to Jerusalem and then followed up with declaring the Golan Heights as Israel’s indisputable territory. The 3rd move declaring Israel’s building in territories not illegal by international standards. After each move preparations for a backlash were expected. So the unilateral moves were done slowly to see the reaction of the Arabs , let it settle in, then on to the next. It seems these moves were set to lay the groundwork for the rollout of the deal of the century after the waters were tested. I also assume both leaders timed the final rollout comfortably after they were both expected to easily be re-elected. They both would have comfortable space to implement safely.

While both leaders can be termed pro Israel, it’s far from reality up on high. You see only practical thinking is most debilitating. Yes we expect both leaders would set out a pro Israel unilateral border carving between the Palestinians and Israel  but what they don’t get is this is Gods exclusive gift to Israel (refer to every chapter in the Torah) and cannot be given under any circumstances. By miracles not politics we have re-inhabited our inheritance.

With a small tap of the finger of G-d, just in time for rollout of the deal of the century, both leaders get the hit of the century with a wave of scandals and impeachment threatening their previously very safe positions.

The message on high seems clear just waiting for Jews, leaders and humanity to accept it on their own free will. Slowly but surely we move in the direction of G-ds will against our own. When will we let go of our logic and show faith in the immutable G-d of the Exodus and history is up to us. A realization that becomes clearer with the passage of events. Until such time we will continue to be frustrated.
at January 01, 2020