Behind The Altalena Affair 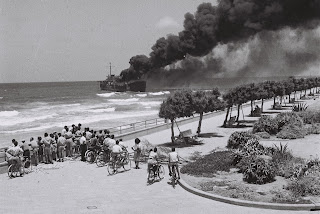 A little bit of required history you will not read or see on television. THE ALTALENA AFFAIR - One of Rabin's proudest military moments came on June 22, 1948. Menachem Begin's Irgun, another Israeli military group, was in the midst of negotiating a pact with David Ben-Gurion under which Irgun would join the new Israeli Defense Force. Meanwhile, the Irgun had loaded a ship, the Altalena, with weapons and Jewish fighters (many of them Holocaust survivors) to join the IDF. Ben-Gurion ordered that the Altalena be fired upon. Rabin carried out his orders to the letter. Later, Rabin bragged how he had "bumped them off on the deck of the burning ship and while they were trying to swim to safety." Sixteen Jews were killed, many shot while swimming to shore.

The Labour party bowed to British pressure for a Jewish State and accepted only a Jewish minority with no autonomy or state. The Labour party accepted continued outright Arab aggression backed by the British in the early years of the Yishuv and outright threw up their hands in defeat and cowardice. The Labour Zionist organization refused to allow Jewish workers in their union if they did not bow to their ideals of socialism and no Judaism. The Labour party spent 95% of their time fighting Jabotinsky's idealistic movement of Pride toward Jewish rights and homeland. The Labour party's ideal of ruler ship excluded sects of Jews and valiant bold Jews who stood against anything less than an autonomous state. Below is a video of just one incident where the Irgun (Jabotinsky's fighting legion) bringing in desperately needed ammunition to fight for independence was shot at and killed even after surrender and while these Holocaust survivors jumped ship for their lives to be killed in the water by their fellow Jews. Ben Gurion's famous words " Blessed are the Canons who shot and killed these Jews".
Of course today, Jabotinsky's ideals are fully vindicated as his words live on in the minds and hearts and have proven to be almost prophetic so many a times. What remains astonishing is the roots of the Labour party then is now and the people of Israel have legitimized and even mostly voted them into most all governments. Learn your history and stand up.
at May 22, 2008 No comments: