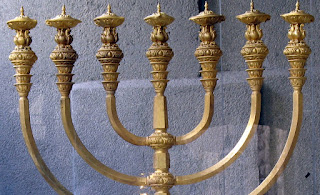 The history of the Jewish people entails criticism of the prophets for having left the belief in God all throughout Tanach. After so many years of existence as a Jew and Jewish people, the defining factor of the nation was and is adherence to the Torah. It remains our only definition. The monumental events of the holocaust occurred only after the Jew wanted to melt into their foreign German culture (Haskalah). Specifically timed by God, after such a horrible event we emerged miraculously and almost undeservedly (by Torah standards) to come to Israel. Then in Israel we won miraculous wars against all odds, gaining back our ancestral territory not on merit but on ancestral promise by god. It is now only less than 60 years later, survivors are still around, and the Israeli is ashamed to be a Jew. The Israeli amazingly sees life without god's hand.

Amazingly, the "learned" Jew of the exile - has successfully divorced Eretz Yisrael with Torat Yisrael. Something so inseparable in the annals of our spiritual and historical existence. Something yearned and dreamed of for so long that it kept us alive for 2500 years in the exile. Today, it is chosen - not to come live in the chosen land.

God said it once, twice, thrice, perhaps hundreds of times। You are a nation separate from all other nations. Holy and hallowed to be mine, in my chosen land. Given secrets of the universe to those who choose to know it. A gift to be as close as possible to the creator - a gift of ecstasy no greater nor will there ever be.

How is it that after 60 years, Israel has successfully grown a generation ignorant to their heritage, lost in their outlook, and only Jewish by the token language of Hebrew. The revival of the Hebrew language was doubted by secularists who felt it was too 'radical' yet today stands as the only testimony and thread of Jewish heritage. The committed Jews from days of yore instituted Hebrew as the minimal requirement with a view to the future, and today it remains as a prized difference amongst the nations. Imagine, if the Knesset today had to vote over an issue like that within the same framework that existed then, surely the Gentelized Hebrew leaders would have all voted for speaking English.

How is it that we expect an Arab to sing our national anthem with our words "The Jewish soul" and be a part of our national history and of course our Jewish heritage ? After all, Herzl wrote his first pamphlet entitled "The Jewish State" not to be open for takeover by any foreign majority.

hello
put your infos on the forum of jewisheritage.fr
shalom