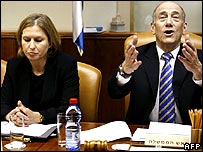 The media is evidently biased in that anything that legitimizes or portrays a struggle that is contrary to government policy is blacked out of media. Likewise, broadcasts for government policy of liberalism, democratic equality, heroism of hellenized progress, Arab integration, peaceful arab co-existence and progress to that extent, gays, lesbians etc.. are emphasized as hallmarks of Israeli desires and postive methedology. In the process, the public is unknowingly as in most societies taught what only a few decide must be taught.

For example, when R' Meir Kahane was repressed, unfairly treated in so many ways be it rallies, in the Knesset, avoided democratic fairness, radio or television talk time banning, and even his killing was all glossed over and dug under the carpet. More recently "Ghandi" too was killed and very little media was given to his views of a Jewishly rooted idea. In contrast, Yitzchak Rabin was given such huge coverage, that today so many years later, there are continous heart felt broadcasts of his loss. All this because Rabin cloaked the Governments policies.