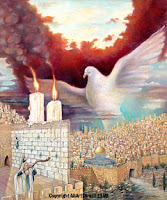 The Gemarah mentions the world will last but only 6,000 years. The 1st 2,000 is characterized by "Null and Void" which is where we saw life up until Avraham Avinu the dawn of Monotheism and Judaism. The next 2,000 years by Torah which is where we saw the giving and study of the Torah by Tanaim, Amoraim, Geonim etc.. The last 2,000 years are characterized by redemption.
The 6,000 years of history directly correlate with the 6 days of creation. In fact every 66.6 years correspond to 1 hour of creation. It is amazing to see that events in history very much correspond to events in the first 6 days of creation.
This people born to barren foremothers against all odds, suffered slavery to witness a promise against all odds, traveled through a barren desert for 40 years and rose to be a chosen nation against all odds, promised (by Abraham) an insignificant parcel of land and created history on it against all odds, witnessed the presence of God in Jerusalem's temple against all logic. Suffered innumerous attempts of genocide and survived against all odds. An ancient people have come back to their origin revived in an ancient existence speaking an ancient authentic language - against all odds. Indeed this nation exists against all odds.

The gemarah cites a dispute between two tannaim over wether the reserection of the dead will be 210 or 214 years prior to the redemption. You do the math..
at December 18, 2007

If the 6000 years of the world parallel the 6 days of Creation as 1000 years each. Does that make Yemos hamashiach only 1000 years?

it seems worse then what "i.m." wrote. there is no time left. we have to be in God's redemption already.